Nightmare will be participating in YouTube MUSIC WEEK, alongside Golden Bomber, Karyu Pamyu Pamyu, flumpool, BOOM BOOM SATELLITES, amongst others. This will not be a live event. Rather, they will be playing each respective band’s most recent recorded lives. Nightmare’s will be on May 1st at 8PM JST (7AM EST) until May 2nd at 7:59PM[…]

As posted on their OHP, Nightmare plan on releasing a new untitled single and DVD in August 2013 to commemorate their 10 year major debut. Their show at Nakano Sun Plaza will be one of the DVD content. More details will come as they release more information.

Following in big brother Yomi’s footsteps, Chiba and Sendai Kamotsu has made the jump from Universal Japan to Avex Entertainment on April 19th.

According to the article in Barks+, the transfer was followed by the emergency announcement of Sendai Kamotsu’s best-of album release. Here’s a rough translation of Chiba’s decision in going into Avex:
END_OF_DOCUMENT_TOKEN_TO_BE_REPLACED 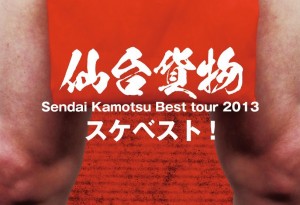 Just announced on their OHP and tweeted by Sendai Kamotsu’s staff, Sendai Kamotsu will be releasing their first best-of album in July 2013. There is no date or track list confirmed as of yet. Once the information is released, we will let you all know.

In the meantime, they have announced a tour in July titled “Sendai Kamotsu Best tour 2013 “Sukebest!” (Sukebest is a play on words here. “Sukebe”= pervert and best. Add those two together and you get “Sukebest.” Clever boys, they are.)
END_OF_DOCUMENT_TOKEN_TO_BE_REPLACED